Why do You Permit C-Players to Remain on Your Team?

Why do so many managers permit C-Players on their teams?

One of my early bosses, Jerry McDaniel, was a man of few words. Sooner or later in our daily conversations I’d start telling him about what one of my chronically under-performing employees did or didn’t do. Here’s what Jerry did one day to develop me. He’d patiently listen to me complain, and after I finished he’d just look at me for maybe five seconds. Then he taught me something I would never forget.

“Hank,” Jerry would say, “Why do you permit it?” He’d shut up, stare at me and there would another awkward silence. But he was right… I was permitting it instead of fixing it like I was being paid to do. Question is, why DID I permit under-performers to remain on my team?

Managers and leaders, let me ask you the same question… are you permit chronically under-performing people to remain on your team? If so, why do you permit it?

A, B, and C-Players – the Topgrading Model

In his epic business management book Topgrading, author Bradford Smart presents his Topgrading model, made popular by the late Jack Welch of General Electric, and as reflected in the diagram below. In his model Smart categorized employees as A-players, B-players, or C-players based on a combination of their levels of performance against assigned objectives, attitudes and behaviors, and and overall contribution to the team. A-players are the superstars and C-players are the chronic underperformers.

Here’s my take on Smart’s Topgrading model, depicting the qualities and characteristics of each performance category, along with a percentage breakdown of an organization’s typical employee population: 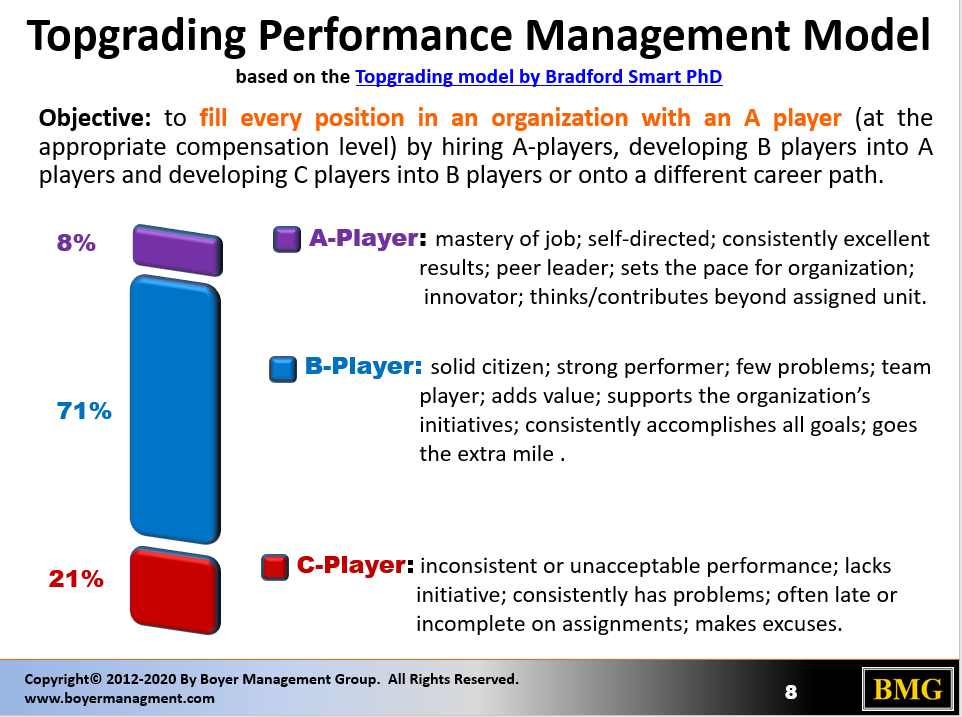 The Impact of A, B, and C Players on Your Team

I’ve been intrigued with the Topgrading concept for much of my 40-plus years of managing people. I’ve collected data on the impact of A, B, and C players on the organizations that employ them, as represented in the small table below. Anecdotally, the numbers generally seem to hold consistently across profit and non-profit sectors, privately-owned and publicly traded companies, and across different industries. For simplicity’s sake I’ve shown an average rather than a range. And certainly there are anomalies to these general trends.

Most managers seem to spend a disproportionate amount of their time trying to correct C-players back to acceptable performance and behavioral levels. They do this at the expense of spending time with the better producing members of the team. C-players generally account for more the vast majority of the problems on the team while habitually under-performing in their assignments.

Back to Jerry’s McDaniel’s question: Why do you permit it?

Forbes published an interesting article entitled The True Cost of Keeping C-Players On Your Team, which found several other estimated performance metrics (quoted below) in addition to the estimates I’ve shown:

What to Do About the C Players?

Just because someone is a C-player on your team does not mean that they cannot be an A-player on someone else’s team. Perhaps they are ill-fit for your position and need a change of employment in order to thrive. Consider these examples:

It is incredibly frustrating for everyone involved when managers try to get out of someone something that simply isn’t there. The manager doesn’t like it and it is not the best use of his or her time. The C-player doesn’t like it because he or she could be more successful doing something else. If after giving the C-player adequate opportunity and support to learn and master his or her role, the C-player continues to struggle, perhaps a more compassionate thing to do is to let the C-player find his or her best fit elsewhere.

To emphasize this last point, as Marcus Buckingham and Curt Coffman point out in their landmark Gallup studies (reflected in the bestseller, First Break All the Rules), the world’s best managers spend the majority of their time with their A players to learn how they sustain much greater performance and bring the ideas back to their teams. While everyone is given an equal opportunity to succeed, the world’s best managers invest very little time trying to change their C-players. They hire the right people for each role, and when employees are not able or willing to perform to the expected standards of their jobs, the world’s best managers compassionately manage the C-players off their team.

Let me ask you a question. Why do you permit that C-player to continue as a C-player on your team? Somewhere Jerry McDaniel is smiling.

Note: This article is based on research and information presented in the Leading Through People™ series in modules LTP-6 Performance Management and LTP-8 Topgrading.

I work with some of the world’s top employers by helping them get the most out of their talented people. My company’s extensive leadership development course catalog provides effective skills-building for everyone in the organization, from the new / developing leader to the seasoned C-level executive. My company’s coaching programs produce significant results in compressed periods of time. I also help job seekers, higher ed, and employment services connect people to better jobs faster. My company’s acclaimed career development tools help people navigate the ever-changing landscape of conducting a successful job search. To find out more, please visit us at www.boyermanagement.com, email us at info@boyermanagement.com, or call us at 215-942-0982.