The more reliant we become on tools, AI, automation, and systems, the more valuable emotionally intelligent people are.

The more reliant we become on tools, AI, automation, and systems, the more valuable emotionally intelligent people are.

Think of emotional intelligence (EQ) as what goes on emotionally:

Where did the term emotional intelligence come from? In 1983 Howard Gardner proposed his now famous Theory of Multiple Intelligences in which he described interpersonal intelligence as an intelligence of sensing peoples’ feelings and emotion.  The science became widely popularized by Dr. Daniel Goleman’s 1995 best seller, Emotional Intelligence.  Over the past decade EQ has become a key area of focus in the area of talent development. 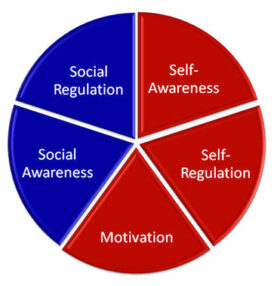 Why has EQ Become So Important?

As people and organizations across the world push for higher and higher levels of throughput and efficiency, we’ve become increasingly reliant on methods, technology, processes, systems, equipment, and artificial intelligence.  The downside of this reliance is that people side of things has been pushed to the side in favor of the process/systems side of things.  Yet people are required make all the systems, processes, etc. work effectively!

Development Dimensions Int’l studied 15,000 leaders in 20 industries and 18 countries to determine what EQ-based interaction skills had the highest impact on someone’s job performance.  What they learned was that the Top 3 on-the-job interaction skills were empathy, offering encouragement, and clarifying details. Their conclusion: “Empathy in the modern workplace is not just about being able to see things from another perspective. It’s the cornerstone of teamwork, good innovative design, and smart leadership. It’s about helping others feel heard and understood.”

Conclusion: emotional intelligence is a critical factor in the future of work and people relationships.

Virtually every role that deals with people requires high EQ.  Some of the most common people-facing roles include:

Yes, EQ Can Be Raised!

We’ve been taught from a young age that all the intelligence we have is what we’re born with, our genetics.  Many of us remember the IQ tests we took in grade school that were used to place us into classes with similarly situated children, such as gifted, accelerated, mainstream and special needs programs.  A differentiator between people with similar levels of IQ seemed to be just how hard one worked to get the best out of what they were given.

Following the work by early EQ pioneers like Howard Gardner and Daniel Goleman, researchers have shown that “EQ does change as a person ages, improving as the wisdom born of experience accumulates. This means that with guided experiential learning and practice, people can intentionally improve emotional intelligence. (Controlling Emotions in the Workplace — The Impact on Your Bottom Line, ©2013 TTI Success Insights).”

Consider these insights from the above white paper:

In Part 2 of Emotional Intelligence: Your Career Superpower we’ll explore some leading-edge ideas, programs, and tools you can use to raise emotional intelligence on both an individual and organizational level.

I help leaders and aspiring leaders improve their performance and acumen, and sales and marketing professionals to become more productive and effective. I also work with some of the world’s top employers by helping them get the most out of their talented people. My company’s extensive leadership development course catalog provides effective skills-building for everyone in the organization, from the new / developing leader to the seasoned C-level executive. My company’s coaching programs produce significant results in compressed periods of time. To find out more, please visit us at www.boyermanagement.com, email us at info@boyermanagement.com, or call us at 215-942-0982.